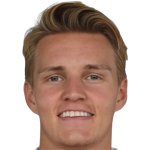 Plays as a attacking midfielder in 4231, sometimes as a furthest central midfielder in 433 or as a wide right playmaker in 4222. Ocasionally likes to dreep deeper in all mentioned roles and dictate play. However, when the team is well advanced in opposition half, takes up positions in between the lines and inside halfspaces. Tends to drift right, make one-two’s with fullbacks and wingers, get some space and either cross in-swinging crosses or release his side winger or fullback in to space. When his team is attacking the opposition’s final third, Ødegaard (in offball situations) tends to stay around the box waiting for second balls and opportunities to take a long shot or make a key pass if the ball arrives to him.

However, if there’s a possibility to make a run in to box, Ødegaard will definitely do it, as he has a good positional sense and awareness playing in front of the opponents’s goal. Despite being in a sense a “traditional number ten”, the norwegian is known not only for his ball playing abilities, but also as a space creator for others. He can and is used for dummy runs (in to the center or half spaces) taking away a opposition’s centreback/fullback/defensive midfielder, also, like mentioned before, dropping deeper and giving an opportunity to one of the central midfielders/fullback/winger to change position or getting some space depending of the further movements of Ødegaard.

However, his world class abilities lies with his ball playing skills, especially vertical passing, playing through opposition’s lines/blocks and near the box chance creation. He’s effective as a creator both in transitions and positional play