In general: variations of 4-2-3-1/4-3-3 which largely depended on Attacking Midfielders positioning. Building from the back: Goalkeeper four defenders and two defensive midfielders altough there were large parts in the Napoli game where the build up formation was something like a goalkeeper, two defenders, one defensive midfielder playing in between them, 2 central midfielders and a fullback (mostly the one which was ball near) So it was either 4-2 or 3-3.

Defensive formations were 4-4-2 with some variations of 4-5-1. In the high pressing parts it was definitely 4-4-2, almost man to man (depending on the positioning of opponenst defensive midfielder), on the other hand, the low block defending was more of a 4-5-1, with attacking midfielder dropping in to the second defensive line and helping overcrowd the channels. 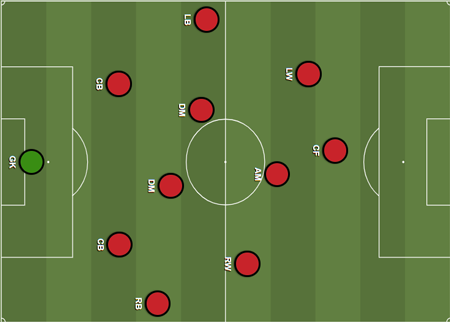 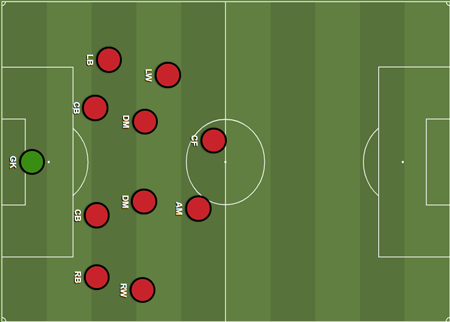 That also meant that Milan’s attacking midfielder didnt’t have to drop deeper to pick ball and was able to occupy one of the channels near the opposition box and keep the defending team’s centrald defender or one of the pivots on their toes. With this buildup formation, Milan occupied 4 channels near the opposition box: the outside two were for wingers/wide playmakers and the more central channels/halfspaces were occupied by the forward and attacking midfield. Of course, there were a lot of interplay between the four attacking players, especially when the fullbacks moved higher. Having a competent attacking midfielder meant that there were situations, where AM, winger and the fullback could combine 3v2 on the wings. In these kind of situations the opposition defensive midfielder had to go to ball side, leaving space in the respective halfspace which then could be used by other Milan players.

3-3 variation had a little bit different effect. Dropping (between the centerbacks) midfielder had more time and space to dictate the play. The AM, who also dropped deeper, was more influential in the second buildup phase, seeing more of the field and proggresing the ball from deeper areas which could distract oppositions pressing patterns and leave some space in the front (especially if the defender, responsible for defensive duties on Milan’s AM, followed him) which could be used either by three Milan’s attacking players or high positioned fullbacks (making it a 5 channel attacking play). Despite deeper playing midfielders, the pitch actually would be more streched, wider and more friendly for deeper wide runs made by Milan’s fullbacks and/or wingers. 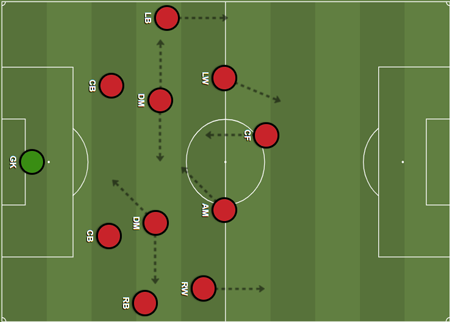 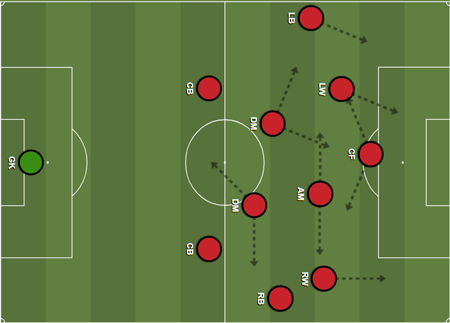 The high block defensive shape was man oriented. The main aim was either to intercept a badly played pass or put as much pressure as possible both for ball playing and ball recieving opposition players. Even Milan’s centerbacks weren’t afraid to come higher up the pitch and intercept the ball before it was recieved by one of opponents attacking players. In numbers language it meant 2 players (striker and an attacking midfielder) near the box, two higher positioned and press-ready wingers on wide areas, two defensive midfielders man to man marking opposition playmakers and ready to push higher when one of the opposing team’s midfielders drops deeper and two fullbacks, who could cover the wide zones. If the opposing team was succesful in the buildup phase, Milan then would get into their fixed defensive structure, mainly 4-4-2 with three defensive lines. It depends on the opposition, but Milan mostly uses it with mid-to-low defensive block. The mid block press usually happens somewhere around the halfway line.

The first defensive line’s task is to cover as more passing lanes as possible, especially the center oriented one’s. The opposing player is forced to progress or pass the ball to the wide zone or go back deeper and start the attack all over again. The second defensive line is more active and intense with their pressing. Because of the compactness of Milan’s defensive formation, ball near central midfielder is free to go into the wider zones and try to win the ball together with ball near winger and (depending of the area of play) ball near striker/fullback. The ball far central midfielder and winger then are able to cover either zones or passing lanes (again, because of compactness) preventing the opposition from options further down the pitch. The third defensive line (defenders) are mostly for the cover of attacking channels, passing lanes and help for some extended pressing actions.

The deep block, which sometimes changes to 4-5-1, is all about preventing the opposition team from playing in the halfspaces and near-the-box zones. If the opposing team is advanced with their positional play, Milan remains compact, drops near or in the box, the attacking midfielder and one of the central midfielders helps with defending in more wider areas, making it difficult for the oposing team to play combinations and vertical passes.. 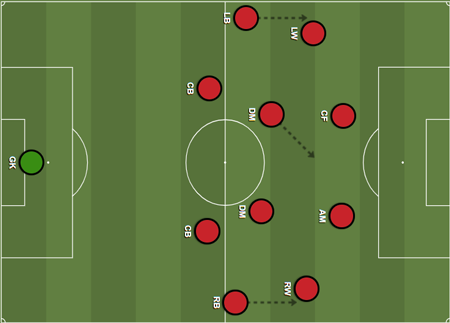 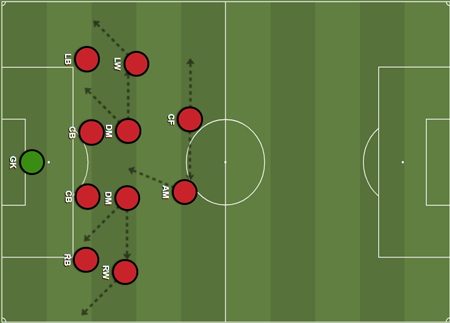